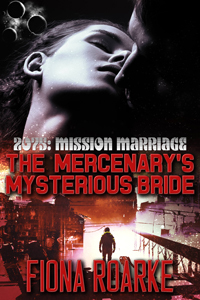 The world has changed. Women have almost no rights and men hold all the power. The insidious influence of the oppressive Vanguard Group is spreading around the world and beyond. But while they can try to roll back the clock on social progress, they can’t control the human heart. Or the will to rebel.
Tough and self-reliant, Veronica Moorhouse chose life on the streets rather than wed the degenerate her power-hungry father chose for her. But now her sister is being forced down the aisle, and Veronica is prepared to lie, trick and coerce to secure the best help money can buy.
Security expert Ryker Thornton’s moneymaker is his husband-for-hire business. He will snap up an unhappy bride-to-be at auction, wed her and then whisk her to safety. For a price.
Veronica wants the gorgeous mercenary with an intensity that shocks her. His blatant sexuality and well-hidden streak of sweetness thrill her, though she knows she can never keep him. Her past has seen to that.
No one messes with Ryker, but the sexy blonde with all the secrets is fearless. He doesn’t mind her secrets—he’s got a few of his own. If she thinks he won’t fight to keep her, she doesn’t know what ruthless is. Yet. 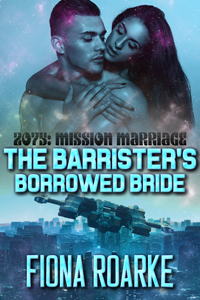 At first, the changes are small. Logical. Consolidate law enforcement agencies to limit redundancy and jurisdictional wrangling. Eliminate jury trials to clear the courts’ backlog. Strengthen the social fabric by offering women incentives to marry, have children. Then the more insidious policies creep in. One by one—citing “the public good”—the men in power are stripping the rights from the female population. As the oppressive Vanguard Group tightens its grip, few recognize the danger. But not all refuse to see. The battle lines are forming.
Zak Ventura is a man on a mission. The city’s most powerful prosecutor has his sights set on becoming the next District Attorney, and that’s just for a start. Only a small band of co-conspirators knows about the golden boy’s hidden life and his efforts to help the helpless.
In a fast-changing world that sees women ever more oppressed, Erika Marsden is one of the few remaining female Lawmen on the force. As an undercover operative, her usual targets are degenerate criminals and corrupt officials. They aren’t men like the beefcake barrister, whose sensual kisses should be illegal.
Zak is careful about who he trusts. Lives depend on it. Even so, something about the exquisite lady Lawman makes him dream of sharing his life with her, whatever the cost.
Erika has never questioned the necessity of her work. But the more she learns about Zak, the more she doubts her assignment—and the lengths she’s ordered to go. Is she doing the job it takes to keep the public safe? Or will she be the downfall of a good man whose only real crime is loving her? 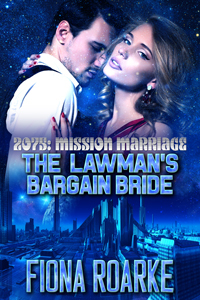 Joshua Bryce has wanted to be a Lawman for as long as he can remember. Never once has he regretted the sacrifices his job as a Federal Interstellar Lawman demands, from the weeks away from home to the ever-present danger.

Lily Montgomery is no stranger to fear or humiliation. Her one golden light is her precious little girl. She will do anything to keep Katie, even seduce the sexy Lawman she once shared a forbidden kiss with — what a hardship.

Josh vowed never to sentence any woman he cared about to the uncertain life of a Lawman’s bride. But thanks to the Vanguard Group’s draconian laws, it’s either marry Lily or send the only woman he’s ever wanted to another man’s bed.

When a monster from her past threatens Lily and her daughter, he’ll do whatever it takes to keep them safe. To keep Lily, period. 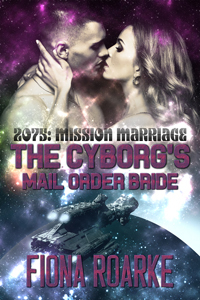 College student Abigail Bryce never imagined she’d one day find herself on a mining outpost far from Earth, waiting to be sold to the highest bidder. She expected her soon-to-be husband to be a grimy degenerate, not a driven man with muscles on muscles and chocolate-brown eyes she could sink into.

Logan “The Hammer” Thornton decided to bid on the blond beauty the moment he saw her. If he had to have a short-term bride to satisfy his genetically enhanced libido and keep him in top form to wrench Cobalt-X out of his mine, he might as well have one who made his pulse jump. He never guessed she’d be so sweet, smart and full of passion.

Good thing their marriage had a time limit. Because why would a woman like Abigail want a life with a cyborg freak like him? 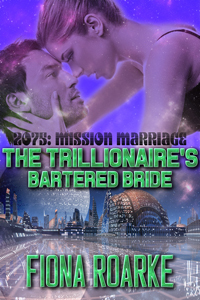 Emily Bryce was the quintessential self-made woman before the Vanguard Group imposed their archaic views on the country. First, the regime made it illegal for women to own businesses. Then, it forced them out of the working world. The latest blow saw Emily on the auction block, waiting to be sold into marriage to one of her former colleagues. Her humiliation was near complete.

Cybernetically enhanced CEO Alek Westmore poured everything he was into building his multinational corporation, with not an ounce of help from his overambitious father. Then a business acquisition brought him a beautiful and brilliant female executive who made him think of much more than the bottom line.

A million dollars was a very small price to pay to make her his bride.

Alek is determined to be Emily’s hero.

But can she ever love a secretive man who will stop at nothing to make her his own?

Recommend this page
© Fiona Roarke.
Nothing's sexier than a good man gone bad boy.
FionaRoarke.com is a participant in the Amazon Services LLC Associates Program, an affiliate advertising program designed to provide a means for sites to earn advertising fees by advertising and linking to amazon.com.
Designed and maintained by JR Creations - webmaster@fionaroarke.com. All content on this site is copyrighted © by Fiona Roarke and any reproduction in any form is strictly prohibited without the Author’s consent, fiona@fionaroarke.com.