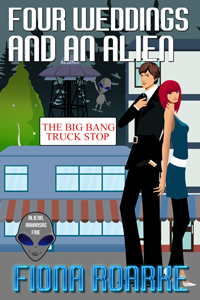 Exiled society princess Francine Hayward Duvall has learned to stand on her own two feet in the Alpha colony hiding in plain sight in Alienn, Arkansas. It helps that the residents don’t give a hoot about who she used to be, only who she is. She’s a hard-working supermarket clerk who takes pride in earning her way. There’s really only one thing missing from her new life.
Ichor-Delta bounty hunter Luther Raphael Boudreaux left his family and all the royal trappings behind long ago and is fully aware that there’s no place for a woman in the nomadic lifestyle of his chosen career. He never expected his heart to be captured by a certain sweet redhead with nothing more than a look.
When Raphael offers to help Francine attend her sister’s wedding on Ichor-Delta, by posing as her fiancé, she jumps at the chance. In return, she’ll give the charming bounty hunter the cover he needs to help a friend in trouble. And if she can indulge in a little romance—or more—so much the better.
Francine might think he’s doing her a favor, but as far as Raphael is concerned, she is the one for him. He’ll go to any lengths to convince her that their adventure doesn’t have to end.
It’s only the beginning. 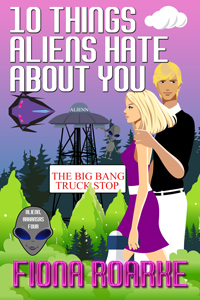 Valvoline Ethyl Grey, the youngest sibling and only daughter in the Grey clan, knows the rules when it comes to Alpha-human relationships—it’s fine to have a little fun, just don’t get too attached, unless you want a one-way ticket back to a homeworld that’s never been home.
Skeeter Bite Sheriff Wyatt Campbell is as easygoing as they come, but even he has his limits. At first he thought Vee wanted to keep their romance under wraps to protect him from a butt-kicking from one—or all—of her six brawny older brothers. Since they seem to like him well enough, that can hardly be the case. Now he just has to convince his commitment-shy girlfriend to take a chance. She already has his heart. Why not his ring?
A woman raised among oblivious humans in a super-secret alien colony in Alienn, Arkansas should know better than to have a super-secret love affair with a human, let alone a sheriff. But strong-willed Valene is all too weak when it comes to a certain tall, blond and utterly scrumptious lawman.
Although he comes to her family’s aid when they need him most and vows to keep the secret from other humans that aliens live among them, Valene is determined to sacrifice her love for Wyatt’s greater good.
Wyatt has other plans. 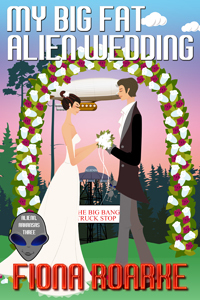 Lucinda Hayward Duvall, of the Designer-class Duvalls on Alpha-Prime, has never quite fit the mold in her noble family. Her four sisters are more beautiful, their behavior more acceptable and their bearing far more regal than she could ever pull off. Even so, she’s happy enough with her books and her routines and to fall in line with the marriage arranged by her demanding parents. Until a chance encounter with a handsome stranger at a galactic way station on a wild and wonderful colony planet makes her question everything she’s ever known.

Easygoing Axel Grey, second son and head of communications for the family business at the Big Bang Truck Stop in Alienn, Arkansas, doesn’t care a lick of spit for protocol or pompous off-world VIPs. On the other hand, he has all the time in the world for a captivating young woman with red-streaked hair, a mesmerizing smile and a contagious sense of wonder. One stolen dance in a convenience store doorway later and he’s ready to give Lucy anything … including his heart.

Lucy basks in Axel’s admiration, blossoming under his regard like a flower starved of sunlight. In their too-short time together, he makes her feel amazing instead of awkward, a treasure instead of an obligation.

Of course, a future together is impossible. Her mother has seen to that. 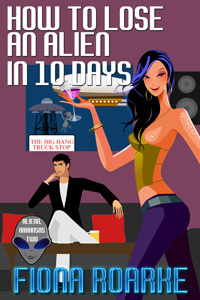 How to Lose an Alien in 10 Days, Alienn, Arkansas 2
Sci-Fi Romance

Alexandria Latham Borne is supposed to marry into one of Alpha-Prime’s most prestigious families. Her unwanted future fiancé has wealth, breeding, social status … and that’s about it. She is less than wowed during their luxury get-to-know-you journey to Earth. Once the spaceship docks in Alienn, Arkansas, Ria jumps at the chance to jump ship and explore the colony of extraterrestrials hiding in plain sight.

Cam Grey takes his job as chief of security at the galactic way station and the Big Bang Truck Stop operated by his family very seriously, but even he needs a break. No one suspects the by-the-book enforcer’s secret refuge is the karaoke bar just over the county line from Alienn, Arkansas. It starts out as just another night of uncomplicated amusement. But no one is more surprised than the jaded Alpha when the gorgeous woman with blue-streaked hair sings her way into his bed — and his heart.

When he learns his sexy karaoke singer has defied colony rules, putting them all at risk of discovery by the unsuspecting earthlings, he knows his duty. What he should do is lock her in the brig. What he does do is ignore all the rules he’s spent his career upholding.

Cam’s also been burned by love before, but his mischievous Ria is a rule-breaker he can’t resist.

Is she a heartbreaker, too? 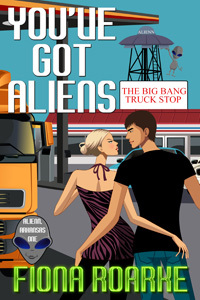 Librarian and aspiring journalist Juliana Masters has a mystery to solve: Who am I? Armed with the truth about her past, she can leave her humdrum present behind and get on with her future. She just needs to complete one lucrative investigative writing assignment and she’ll be on her way. All she has to do is prove aliens live and work out of a secret facility based under the Big Bang Truck Stop. No problem. Getting her socks knocked off by the Fearless Leader isn’t part of the plan.

Diesel Grey worked for years to achieve his goal of heading up the family business in Alienn, Arkansas. Mission accomplished, but being Fearless Leader of a galactic way station comes with a lot more headaches than anticipated. It’s hard to consider the shockingly well-informed writer a headache, though, especially when she makes him ache in all the right places.
If he’s not careful, he’ll give her everything she needs to blow his family’s cover and expose to the human world that aliens do walk among them.
All he really wants to do is sweep her up in his arms and never let her go.
If only his trigger-happy brother would stop erasing her memories …

Recommend this page
© Fiona Roarke.
Nothing's sexier than a good man gone bad boy.
FionaRoarke.com is a participant in the Amazon Services LLC Associates Program, an affiliate advertising program designed to provide a means for sites to earn advertising fees by advertising and linking to amazon.com.
Designed and maintained by JR Creations - webmaster@fionaroarke.com. All content on this site is copyrighted © by Fiona Roarke and any reproduction in any form is strictly prohibited without the Author’s consent, fiona@fionaroarke.com.